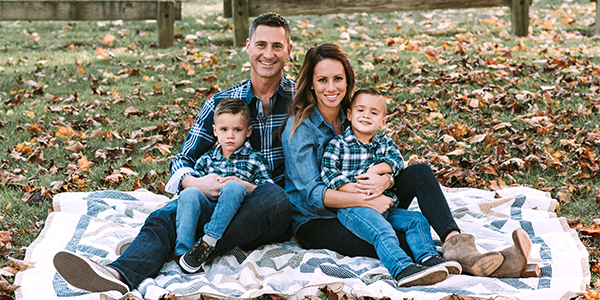 Imagine that your hard work and skills gained from a few years of selling RVs have taught you what the customer is truly looking for. This knowledge and keen understanding leads you to become one of the most innovative designers in the RV Industry. The manufacturer you've been working for experiences sales and company growth, which gets the attention of a larger company. This news leads to a company sale, which brings you and your family a significant pay day and some long-term security. A discussion of the things now possible ensues: the dreams you can plan for; the missional work you can support. Then it hits you what this news also brings…a large tax bill! What can you do? This is what faced Micah and Naomi Staley, who attended APU in the mid 2000's. APU is where they met and where important transformations took place as they were undergrads, Naomi in the Nursing program and Micah playing football.

Micah and Naomi frequently discuss the experiences they were exposed to at APU. In looking back, they realize just how fortunate they were for the opportunities to grow in every direction -- intellectually, professionally, and personally. For Naomi, the nursing program inspired excellence and taught her the value of the profession and the deep commitment required in order to make a difference. Micah's involvement in the football program instilled within him the discipline and work ethic that serves as the cornerstones of his professional life. What he learned at APU set him up in every way for certain successes they couldn't have imagined possible.

In addition to the challenges of such rigorous academics, they both experienced that which can't be had just anywhere: spiritual support. As their belief systems took shape, they could not have known then the impact it would have on their later lives. Indeed, those formative years grounded them in their faith.


As scholarship recipients, Micah and Naomi have always been keenly aware that they could not have attended APU without financial support. Because of this, they felt strongly led to give back in some small measure in order to pass on the abundance afforded them during their time of need. It is their sincerest desire that others could be similarly supported in their own journey. Perhaps they, in turn, might do the same for another down the road, in effect perpetuating blessing upon blessing.

Excited about their increased capacity to bless and support ministries, they considered ideas for wise ways to do so. Micah's cousin Adam, who also played football with him at APU, is a financial planner who is part of the APU Financial Advisor Network, where he learned about the Charitable Lead Trust. Adam realized this was an idea Micah and Naomi should consider to help with their upcoming tax burden, and also allow them to make annual charitable donations for years. By placing a portion of the proceeds from the company sale into the Lead Trust, they would receive a substantial charitable deduction in the current year. This would reduce their tax bill! The Lead Trust then pays out the income from the trust to their chosen charities each year, for a term of years. Then the trust dissolves and they receive the principal back. The Staleys decided this is a great option since they don't need all the funds now, but may have use for it in the future when the trust term ends. This also provided a structured giving model and led them to pledge a portion of the annual income to APU. This will build and grow the "Staley Scholarship Endowment", which will provide annual scholarship funds for both nursing students and football players for many years to come!

Who will be the next Micah and Naomi? Let's watch and see what the Lord will do!